Using a combination of field work, expert opinion, and species distribution modeling, we’ve identified important regions, habitats, and individual species that are the highest conservation priorities. Some of these habitats and their associated bees are limited to relatively natural landscapes, but backyards, farms, and city parks can all support a diversity of bees with sound management practices. 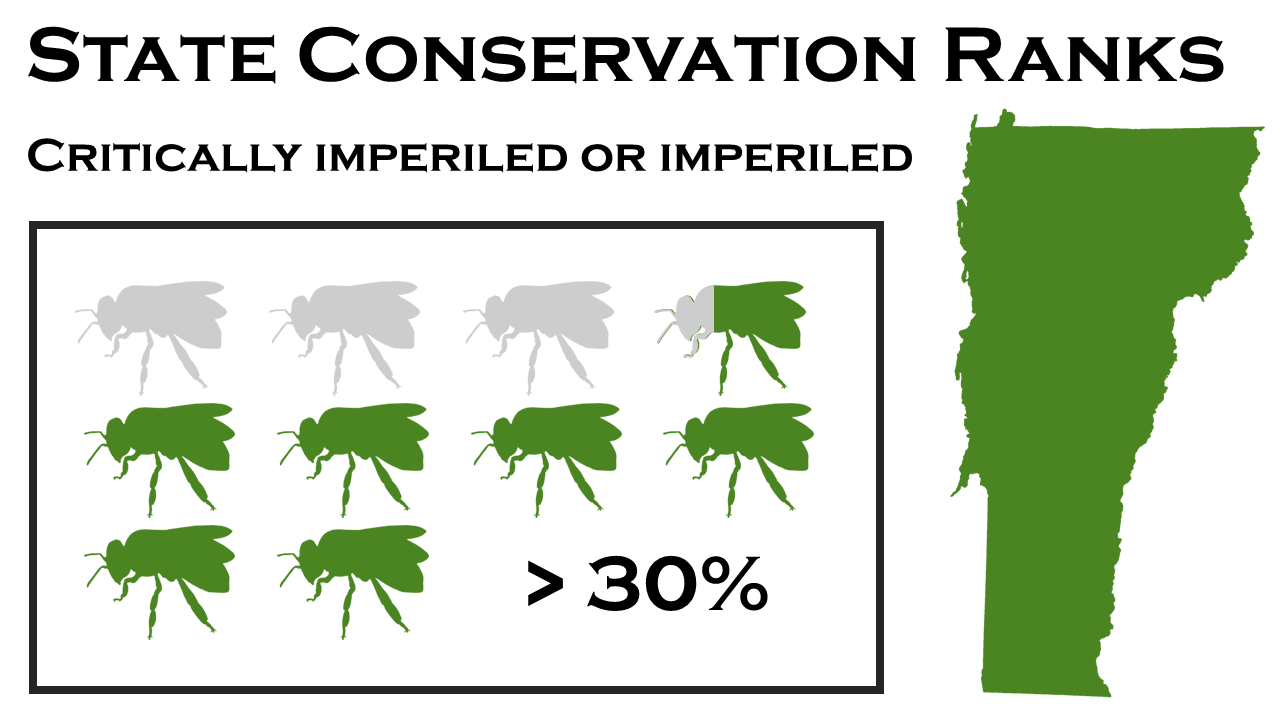 A critical step in setting priorities for biodiversity conservation is an assessment of extinction risk. This requires detailed knowledge of the distribution, population size and trends, and critical threats for each species. The NatureServe Conservation Rank Calculator enables conservation biologists to translate this knowledge into three categories of information: rarity, threats and trends. The tool uses these data to determine an overall conservation status rank by automatically applying specific rules. These results are then reviewed by experts and in some cases adjusted based on further information.

We have assigned preliminary state conservation ranks (S-ranks) to 335 native bee species in Vermont. Ten species that had no records after the year 2000 were assigned an SH (Historical) or SX (Extirpated). Over 30% of Vermont’s extant native bee species are preliminarily ranked as critically imperiled or imperiled. Many critically imperiled species are known from just a few records, often from a single location, and with no direct information about population trends. Many of these species may be naturally rare in Vermont, making their populations susceptible to environmental perturbations. On the opposite spectrum, nearly 23% of native bee species are apparently secure or secure. More occurrence records and threat assessments are needed to improve and clarify these some ranks.

Global (top) and State Ranks (bottom). Over 130 species are ranked Vulnerable or lower and may need conservation action to persist.

From 2012-2014 we surveyed the bumble bee community across Vermont. Trained community scientists joined us to search thousands of locations across the state and recorded more than 10,000 individual bumble bee encounters. We compared the survey data to historic specimens that we identified to species and digitized from public and private collections. The results provided sobering news about the status of Vermont’s 17 bumble bee species, and led to the listing of four species as Threatened or Endangered in Vermont, one federally Endangered, and added nine species to the 2015 Wildlife Action Plan as Species of Greatest Conservation Need (SGCN).

Using this criteria, we identified 55 bee species that we believe are in urgent need of conservation efforts and should be considered for SGCN status when the State Wildlife Action Plan is updated in 2025. Additionally, our knowledge of Vermont bees was incorporated into the Northeast Association of Fish & Wildlife Agencies recent update to the list of Regional Species of Greatest Conservation Need. The list now includes 19 bee species that have been recorded in Vermont.

Building on the concept of Important Bird Areas, we identified 12 areas as Important Bee Areas (IBeeA). This network of sites is vital to the long-term viability of bee diversity in Vermont. An IBeeA can be large or small, public or private, and must meet one of several objective criteria.

The Following criteria were used to guide our selection process to identify Important bee areas (IBeeAs):

All of these areas contain a mix of public and private land with some conserved parcels, each with a unique set of threats and conservation priorities. More detailed management suggestions will be provided in the future for many of the habitats and species covered by these IBeeAs, but it's not too early for land managers to be considering rare bees in management decisions. Since the IBeeA program is voluntary, there are no legal or regulatory restrictions.

Priority survey Regions are areas with unique habitats or undersampled regions that we've identified. These priority regions require additional surveys to assess bee populations and may harbor species not found anywhere else in the state.

Bee communities are the assemblages of species that occur together in a given location. Using occurrence data for 235 native bee species, we created species distribution models that allowed us to compare bee communities across Vermont at the scale of one square kilometer. Using these data we were able to identify areas within the state that support unique bee communities. Identifying these areas within Vermont is critical to maintain bee diversity into the future. Many of these areas warrant further investigation, but conservation action should be a priority.

Since many bees are closely tied to individual flower species or genera, planting and encouraging flowers that support bees that are conservation concern can quickly be beneficial for their populations. Other habitats, such as mature rich hardwoods or sand pits, support unique bee communities and deserve bee-focused management and conservation actions. The following list of plant communities or other habitats support a high proportion of unique and/or imperiled bee species. 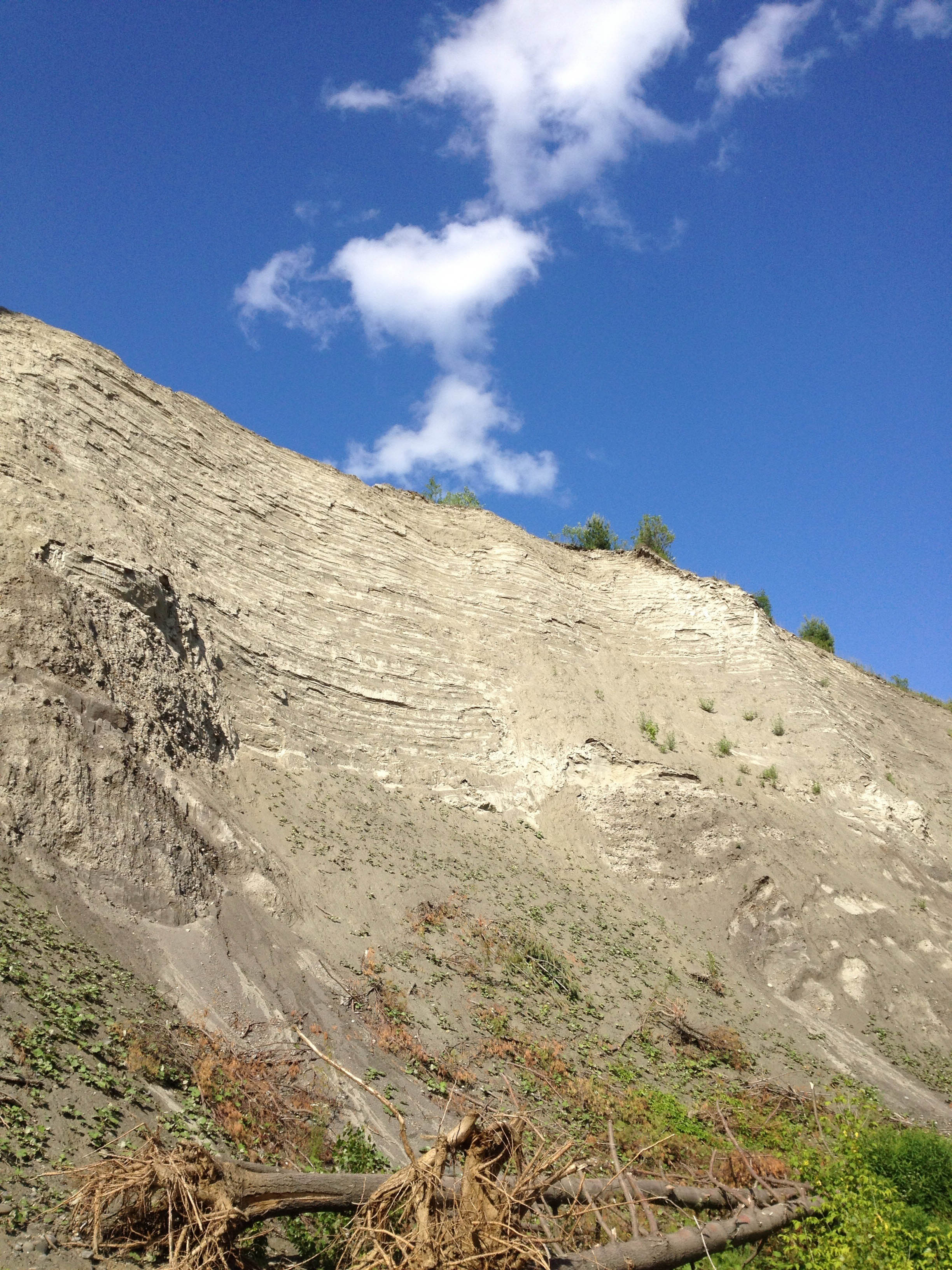 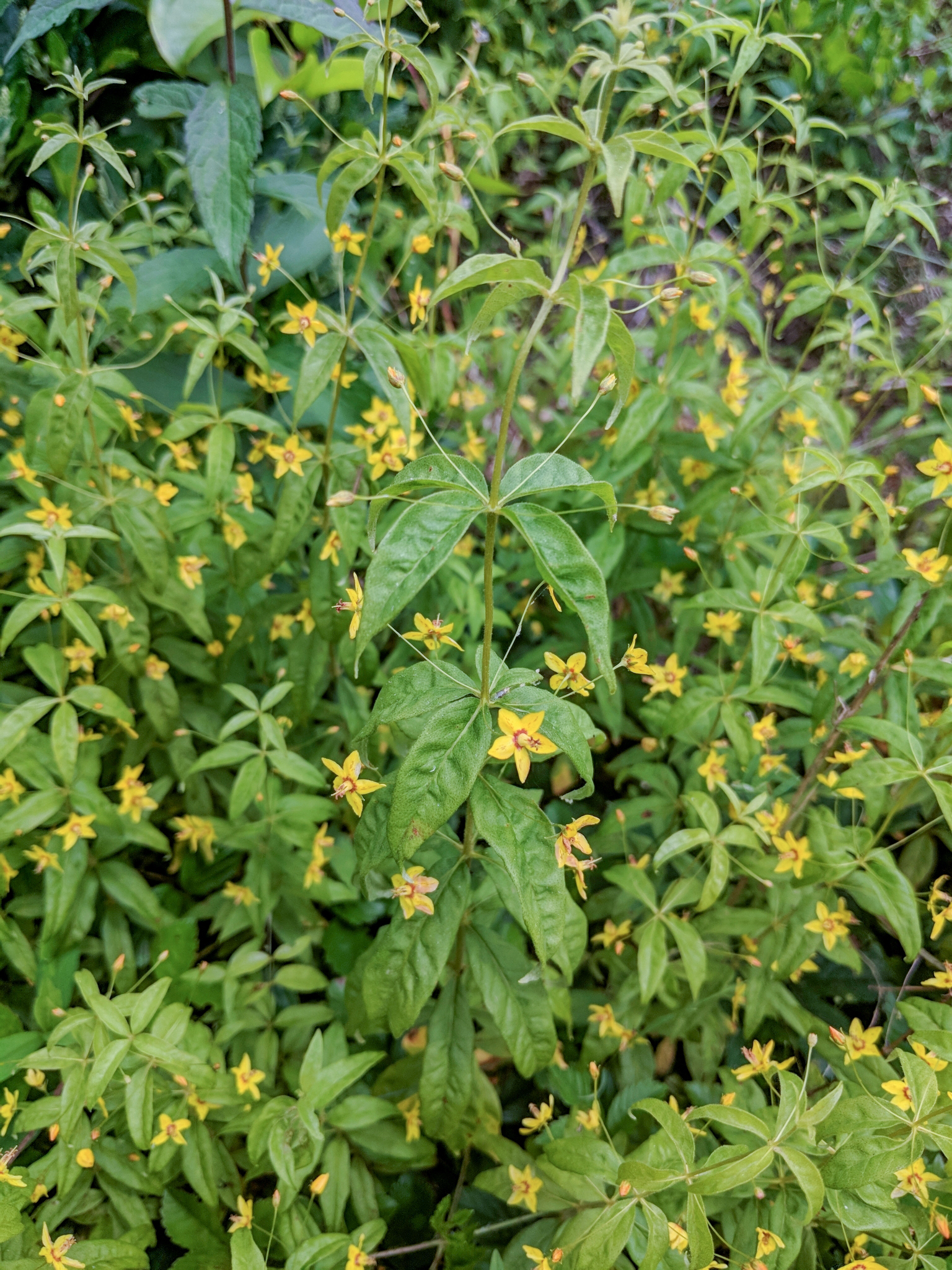 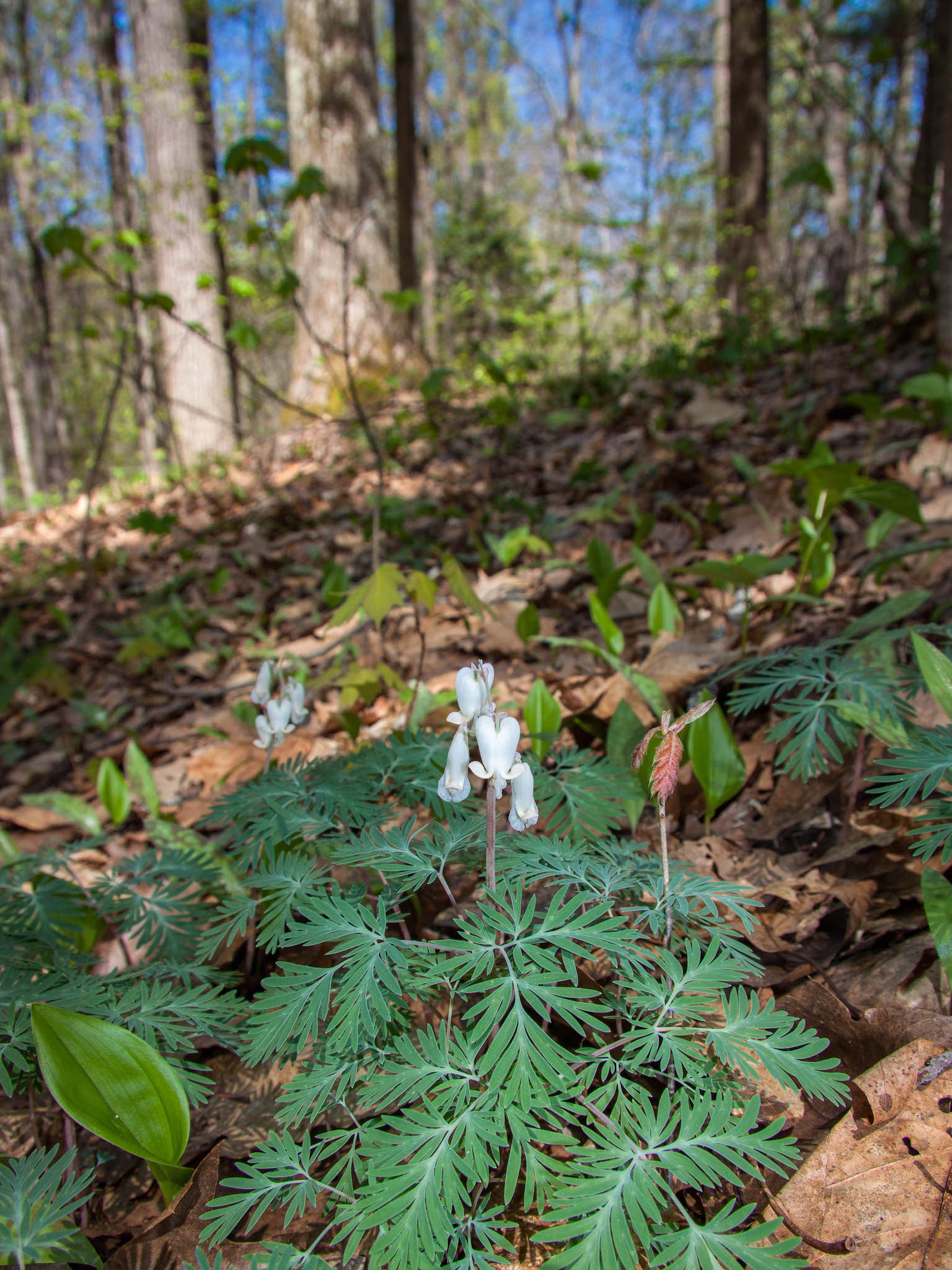 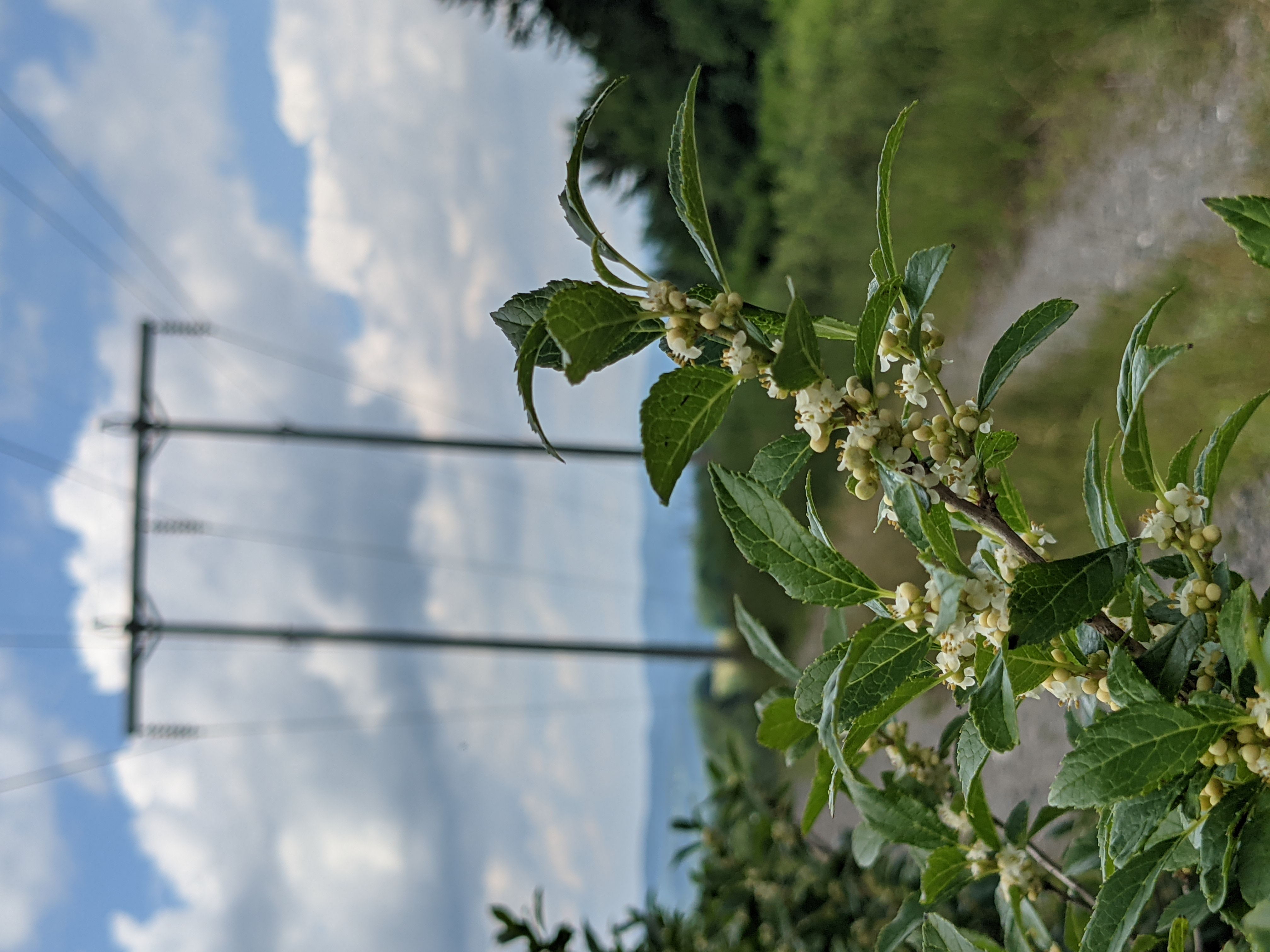 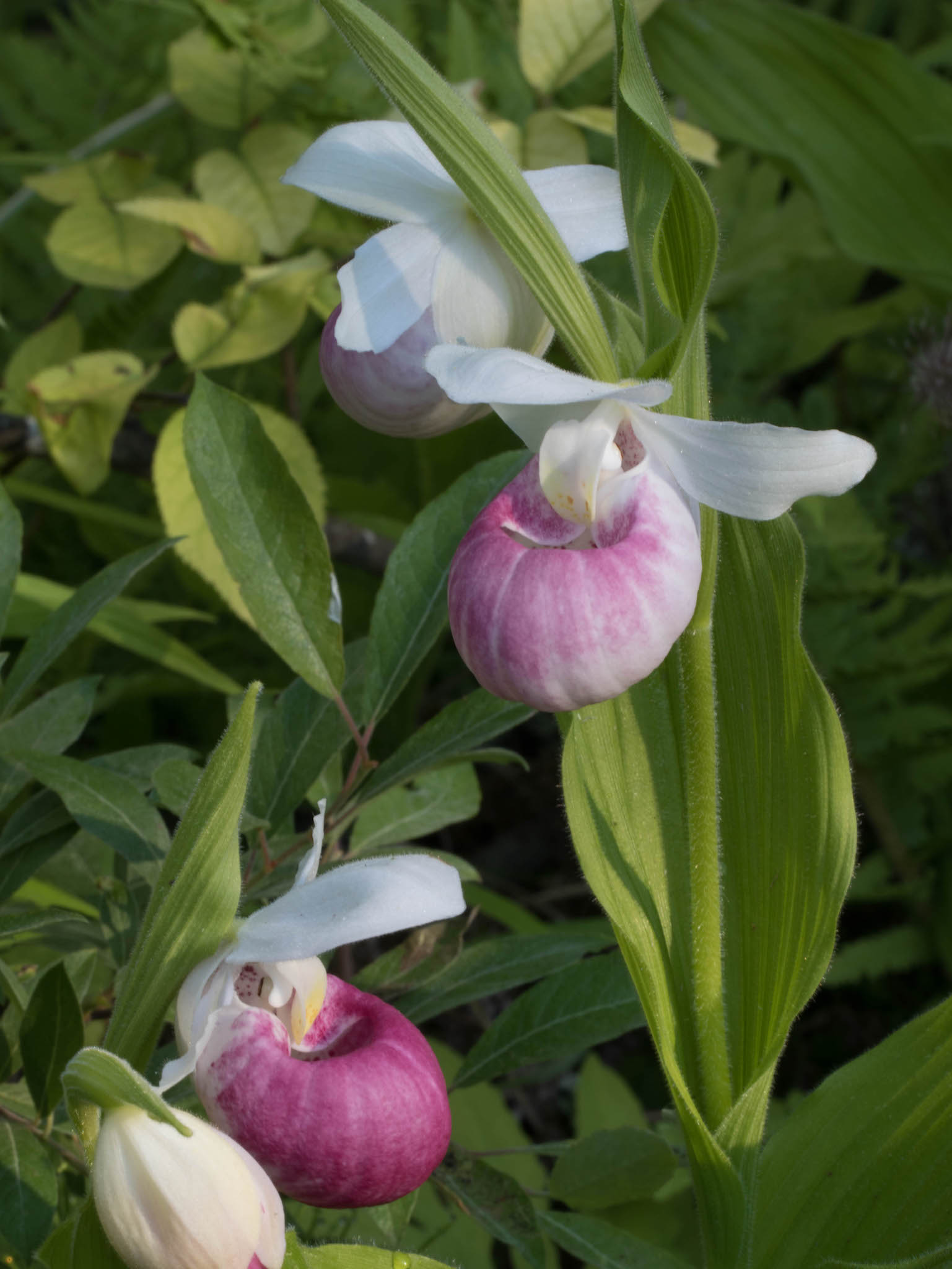 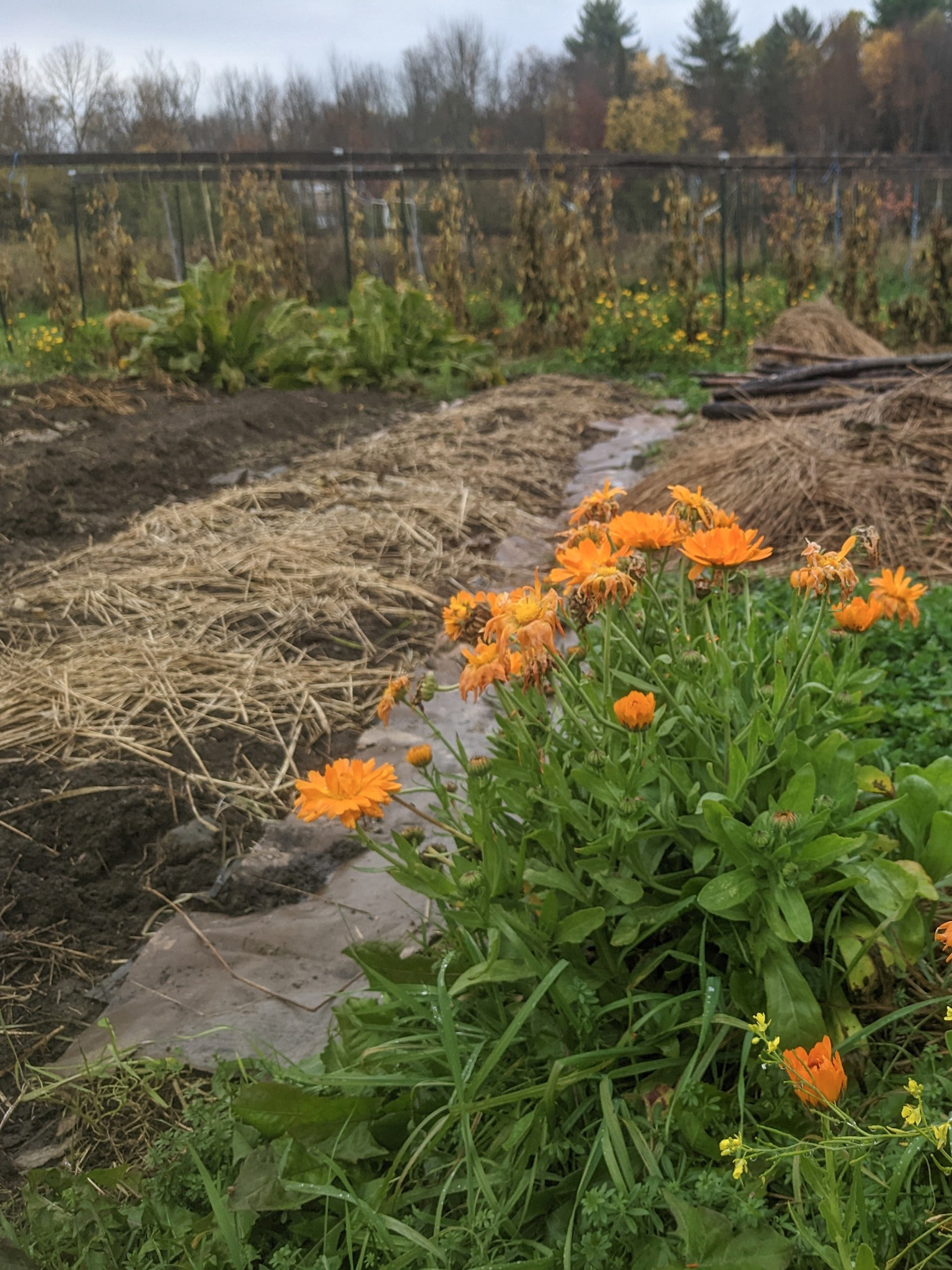 There has been a growing interest in pollinator conservation in yards and gardens with nationwide campaigns such as No Mow May, Bee City USA, the Million Pollinator Garden Challenge, and others.

Most wild bees need flowers, yet not all flowers are created equal, and there are other considerations that go into great pollinator habitat. Bees also need nesting habitat which ranges from dead flower stalks to bare, sandy soils. There are many resources that can help you turn your yard and garden into a spectacular pollinator haven.

While there is a lot that a landowner can do to actively encourage native bees, there is also a lot that can inadvertently harm them. Clearing of native shrubs and flowers, frequent mowing, and pesticide and herbicide treatments are all likely to be harmful. Some nurseries sell plants that have been pre-treated with pesticides such as neonicotinoids, a group of insecticides that are toxic to bees even in small quantities that are absorbed by plants and can be present in pollen and nectar. Ask about any treatments before you buy. Some companies are now selling live mason and leafcutter bees with bee hotels that can be installed in a garden. This can spread parasites, pathogens, and introduce exotic bee species or genes to local populations.